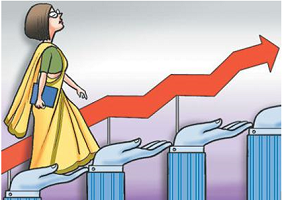 As we completed our analysis for the Secretarial Audit Reports: Trends and Practices in 2016, we found a few data points of interest that attracted our attention. As in the previous year our population for this study was S&P BSE 500 Companies, which represents the cream of Indian Corporate Sector. It is possible that the International Women’s Day on March 8th had something to do with our heightened sensitivity to the gender related issues as these are some of the data points we wish to highlight in this article for deliberation. To list a few data points of interest:

· 16% of the S&P BSE 500 Companies had women company secretaries. A number that increased by 4% compared to the earlier year.

· 10% of the Secretarial Audit Reports were signed by women company secretaries, an increase of 1% over the previous year.

We wanted to put these numbers into perspective, as anecdotal evidence of company secretaries seen in conferences, training sessions and applications received for job vacancies suggest that women company secretaries outnumber if not are equal to the number of men.

However a search on the Google revealed that this data was not readily available. We thought why not write to ICSI for getting this information.We were pleasantly surprised when on February 23, 2017 within 10 minutes of our sending an e-mail to the Institute, we received a reply with the data as on date:

A possible reason for this under representation in S&P BSE 500 companies sample size could be that the women company secretaries were junior having qualified in recent years compared to their male counterparts.

Analysed by their turnover, we notice that the presence of women was lower in bigger companies. For instance, among the top 100 companies only 6 had women Company Secretaries. Further, the top 50 had 3 and in the top 25 companies only one was a woman and that company was 24th in the ranking.

Given this male dominance, despite growing feminine presence, we present the obvious road to bridge the gap:

Wish you all a very happy Women’s day. Hope to soon see the day when this gap is fully bridged, for a fair society is good not just for women but for men as well.