Knowing the Company: What do Movies and Companies have in Common?

Home/Uncategorized/Knowing the Company: What do Movies and Companies have in Common?
Previous Next

Knowing the Company: What do Movies and Companies have in Common?

Movies and companies have a huge influence on our lives today. While movies impact the popular choice of attire, language and behaviour, in the case of companies their influence is equally strong but only subtle. Not just for impact, but even in their workings common threads can be found. Producers, financiers, directors, actors, editors and audience all have their counterparts in companies. Only their forms differ, while in substance they play the same roles.

Players in Movies and Companies Matched 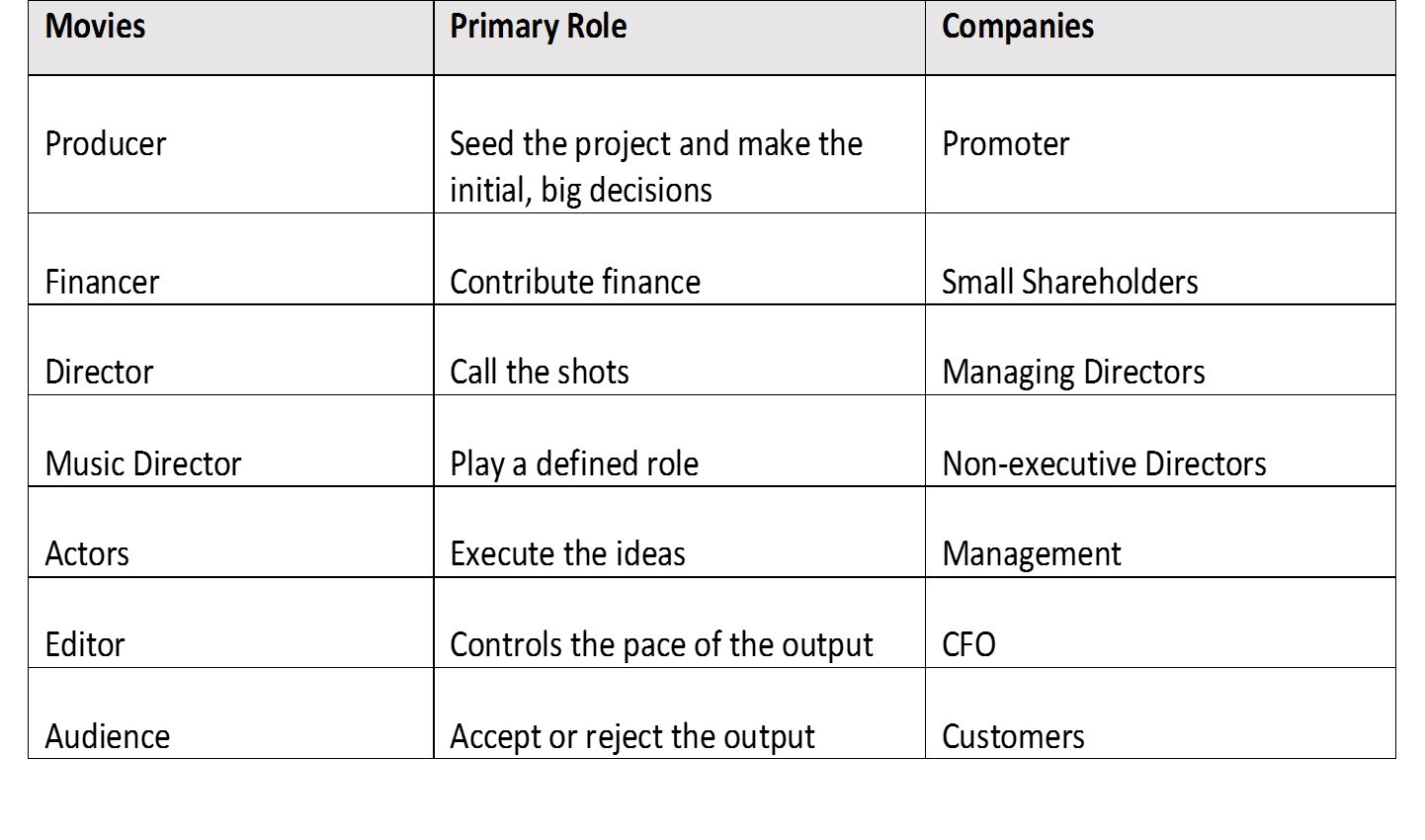 Promoters like producers invest the initial capital. As compensation for risking their money, they get to make the big decision of what to do, who will do it, when it should be done and how will it be done. On occasions when their purse does not match their venture’s need, they co-opt other investors. In the process, they cede control in proportion to the quantum and urgency of their need. Of the many big decisions they take the most crucial one is in appointing a director.

True to their name, once appointed, directors call the shots. A major difference between movies and companies is in the number of directors and how they are appointed. While movies have only one director who is handpicked by the producer and holds the ultimate authority, in companies there are more than one directors. Together they makes up the Board of Directors and collectively hold the rein. In addition, company directors are elected by the shareholders in a ballot, where each shareholders’ vote is weighted in proportion to the shares they hold.

Given their larger number, corporate directors come in multiple hues. Dominant shareholders who become directors are called Promoter Directors. In contrast an employee of the company who is also a Director is popularly called the Executive Director, though the Companies Act, 2013 call them Whole-time directors.. The chief executive of the company who is also elected to the Board of Directors is an executive director, but by virtue of his dual position, he is distinctly recognized as the Managing Director and occupies a prominent position playing a pivot role. In contrast to these Directors who derive their legitimacy through links with shareholders or employment and uphold shareholder interests, two other variants–the nominee directors and independent directors are also found, who safeguard different interests.

Representing specific stakeholders—usually lenders, the government or the regulator, nominee directors limit their view to safeguarding the interest of their principal. Lenders, not have voting rights ensure their nominees get elected by signing a binding contract signed with the promoters or majority shareholders as a precondition to their lending. In case of government or regulators, it is usually a license condition or a subsequent precondition for operations that ensures their presence in the Board of Directors.

Next week let us look at shareholder-director relationships in general and the advent of independent directors in particular.