Setting Secretarial Standards: What Next?

Home/Uncategorized/Setting Secretarial Standards: What Next?
Previous Next

Setting Secretarial Standards: What Next?

(This article was published in the Souvenir released on the occasion of the 40th Regional Conference of Company Secretaries, held in Bangalore on June 19-20, 2015)

Do Benefits justify the Cost of Standard Setting?

For the first time the world saw two unique business innovation introduced in India by the Companies Act, 2013. Mandating Corporate Social Responsibility (CSR) for larger companies is the better known innovation of the two, but equally impactful and globally seen for the first time is the mandate for Secretarial Standards.

The benefits of CSR is publicly acknowledged at a conceptual level, even as in private conversations many questions its ability to provide concrete benefits. However this is not the case with mandating Secretarial Standards, where both conceptually and in practice its value is acknowledged and its tangible benefits eagerly anticipated.

If at all any external evidence was needed to justify standard setting for business processes it arrived on June 9th, 2015. On this day Cebr, the Centre for Business Research published one of the most comprehensive studies on the economic benefits of setting Standards titled ‘The Economic Contribution of Standards to UK Economy’. A historical study covering the 90 year period starting from the year 1921, it is comprehensive as well, blending macroeconomic impact analysis with a micro-level analysis of 527 UK companies. True to its comprehensive nature, the study reports both the financial impact and the conceptual drivers for productivity.

The seminal study estimates that the Standards used in business could be contributing 37.2% of the annual productivity growth recorded during this 90 year period. Translated in monetary terms, Standards used in business added an extra £8.2 billion to the UK GDP in 2013. Further, it identifies the symbiotic and complementary roles of standards, education and technology in boosting productivity and through it economic growth. 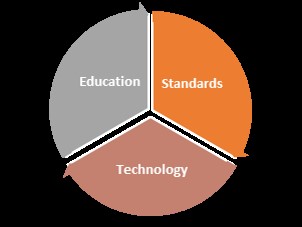 Importance of Standards in India Today

In the current Indian environment, where policy makers are targeting double digit GDP growth to meet the aspirations of Indian citizens, what is the role that professional bodies like ICSI can play in realising this laudable objective? Further since ‘ease of doing business’ is a pain point today, with India languishing at 142 out of the 189 countries ranked in 2015, there is no doubt that professional bodies like ICSI can play a critical role in accelerating economic growth. Taking a leaf from the Cebr study, it appears that the focus on educating a larger professional group, enlarging the professional standards framework and actively promoting technology in day to day work could be the obvious path ahead.

ICSI, the youngest among the three professional bodies has done a commendable job of attracting fresh talent to take up the profession of Company Secretary. Despite starting as late as in 1980, or even if we track back to the earlier avatar of Government Diploma in Secretaryship in 1960, it has a very impressive Student to Member ratio of 9.1 with 319,907 students[1], reflecting the vitality of a young profession on a rapid growth path. In contrast, ICAI, the oldest of the three professional bodies with almost a hundred year history has a Student to Member ratio of 1.27. Not just the ratio, even if we consider the absolute numbers, the profession of Company Secretary has attracted twenty five thousand more students than the Chartered Accountant profession.

Historically, it is corporate scandals and damage to professional image that triggers standard setting process in most professions. But the trigger for Secretarial Standard Setting though not articulated by ICSI, is best captured in the words of BSI, the leading standard setting body in the world, which defines standards as ‘the distilled wisdom of people with expertise in their subject matter and who know the needs of the organization they represent-people such as manufacturers, sellers, buyers, customers, trade association, users or regulators’.

The initial set of secretarial standards pronounced by ICSI is comprehensive and serves most of the then prevailing needs. Covering most procedural issues, the ten secretarial standards issued till date provide guidance to all budding professionals in handling their routines. With the system for standard setting in place, handling emerging issues as and when they arise, issues like board evaluation and director’s performance evaluation may not be a major challenge.

The role of Technology

India has today more than 1,000,000 active companies. In addition the newer breeds like One Person Company and Limited Liability Partnerships are growing rapidly. With only 35,000 qualified secretaries to serve them, increasing productivity is a critical need for the profession. As we scan the global environment, it is very clear that this need will only grow, as the data from other advanced countries show a direct correlation between number of companies and the GDP size. For instance UK, from where we can trace the origin of our Indian corporate law, as of April 2015 had 3,496,733 companies.

Cebr study clearly points to the complementary and symbiotic role of education, standards and technology in promoting productivity. In contrast to the commendable progress made by our profession in the domains of education and standard setting, it appears that similar progress is not visible on the technology front.

Technology at its core multiplies human capabilities. It helps us do more work of predictable quality with the same resource and time. In the field of secretarial practice which involves extensive documentation, technology has a critical role in all the four aspects of capturing inputs, processing them, presenting the output and storage.

To assess the positive impact of technology we only need to look at banking business and accounting function. Today it is impossible to visualize both in the absence of internet, databases and computers. Looked at differently a commercial organization like Reliance Industries which accounts for 3% of India’s GDP also cannot exist without internet, databases and computers. In contrast, corporate secretarial function has moved from the first generation technology to second generation technology. Use of third generation technology is still in a state of infancy. Using audio and video links for board meetings has just been acknowledged and permitted. Substantial benefits from using database, electronic records and cloud computing is untapped, as errors can be eliminated and predictable quality assured.

Agenda, minutes, registers and returns form the core of secretarial records. From an operational perspective large number of items exist where approvals are required from shareholders, board of directors and Sub-committees of the Board. As experienced Company Secretaries can tell you depending on human skills alone to interlink all these variables can lead to costly errors. By using expert skills, if databases are constructed once establishing these links, they can be used repeatedly without fear of costly omissions. Likewise easy storage and quick retrieval of secretarial records stored in electronic form can save enormous time spent in searching for manual records.

In summary, increasing productivity is the need of the hour for every economy, business and profession. India and Company Secretaries are not an exception. There is no other path to productivity gains than education, standards and technology. We have made significant progress on education and standards setting front. The current need is to focus and invest in technology if we want to guarantee BLISS for our profession.