The book identifies proliferation of technology, population growth, globalisation and financialisation as the four pillars of the unprecedented and spectacular growth in living standards in the last 200 years, writes Shankar Jaganathan 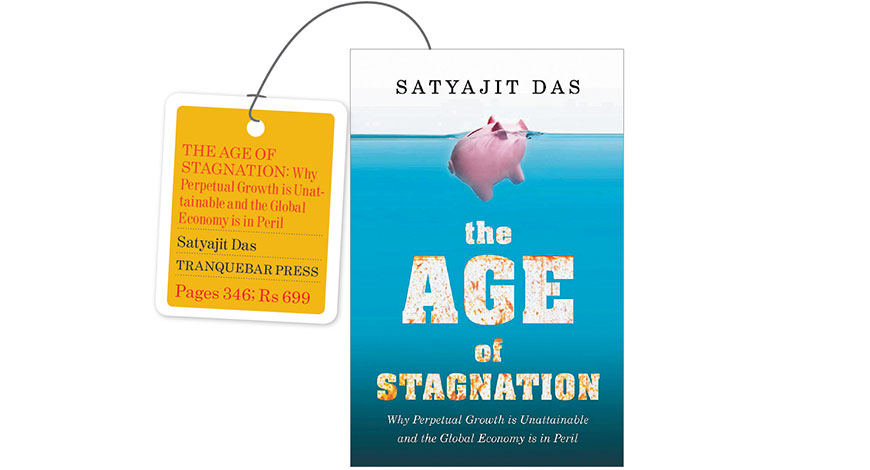 First Things First: The Age of Stagnation: Why Perpetual Growth is Unattainable and the Global Economy is in Peril by Satyajit Das is not a book for those who want to be reassured about the bright prospects of our global economy. Neither is it for optimists who believe tomorrow will always be better than today. This book questions the belief in popular wisdom of technology and innovation as the universal answer to all human problems. It evokes sentiments similar to the one that Thomas Robert Malthus’s book An Essay on the Principles of Population would have evoked in the 19th century.

Australia-based Das is a former banker-turned-consultant and academic. The book can be divided into three parts. The first three chapters present the author’s view of how we got to our present predicament. The second part or the next four chapters narrate what will hold us back and the last three chapters set out what it all means for us as an economy and as individuals.

The book identifies proliferation of technology, population growth, globalisation and financialisation as the four pillars of the unprecedented and spectacular growth in living standards in the last 200 years. Even as steam engine, electricity and the Internet multiplied production of goods and services, population explosion from less than a billion to over 7 billion people ensured steady demand. Supplemented by globalisation which made the goods affordable and financialisation that provided loans to make it accessible to large sections of population, we have had a period of unprecedented prosperity. This line of reasoning is not in conflict with the popular wisdom.

The author sees the global financial crisis in 2008 as a landmark event that marks the reversal of this universal growth. The same factors that propelled growth for the last two centuries could now hold it back heralding the ‘age of stagnation’.Technology, which used the abundant natural resources, now has scarce resources thereby limiting growth potential; the looming water scarcity is a very visible example.

Likewise, in place of population explosion, Das sees marginal population growth further constrained by an aging population that limits income and consumption. Globalisation too is under threat with countries competing to capture the limited growth available. This leaves the political leadership and policy makers to bank on low interest rates and increasing debt to sustain economic growth.

The book argues that the easy money policy of using low interest rates and higher debt to promote growth is fraught with the danger of widening inequality which, in turn, will further dampen growth as the rich in contrast to the poor have a lower propensity to consume.

Given this macro-economic outlook, the author sees the life of majority of individuals on our planet deteriorating. An elongated working life with little or no job security coupled with a morbid old age, resulting from expensive private healthcare and poor social security support.

The cure the book suggests for making the life of individuals better goes against the prevailing trends. Stemming the increasing consumerism, increasing public funding for social welfare schemes and increasing direct taxes on income, wealth and inheritance are all possible but look quite utopian.

The ideas in this book are quite simple and very clear. Further, what makes The Age of Stagnation commendable is the amount of supporting data used to reinforce the conclusions reached. While the data points in the book are quite striking and illustrative of the points made, absence of reference in some places and incomplete details in a few others could lead some of the readers to view the book as biased.

Overall, there is no doubt that the time spent reading this book is well invested, as the counter-intuitive results stick to the mind making us look at the world around us a little differently. Having said that, I must warn the reader that this book does leave one feeling a bit morose as one finishes it and puts it down.

The writer is Founder & CEO, CimplyFive Corporate Secretarial Services, and by passion an economic historian and author

This article was published in BW Businessworld issue dated ‘June 13, 2016’ with cover story titled ‘IPL Is Back On The Block’